It’s a long old journey up to Edinburgh from London. Almost six hours on the train, which feels especially long when you’re six months pregnant. But that’s one of the reasons I was so keen to visit Elaine Miller. Pelvic floor physio by day, she has a now sold out run with her comedy show Gusset Grippers at the Edinburgh Fringe festival. I was looking forward to meeting her to find out about how I can look after my pelvic floors now that I have a baby on the way, and what I might expect when it comes to sex. 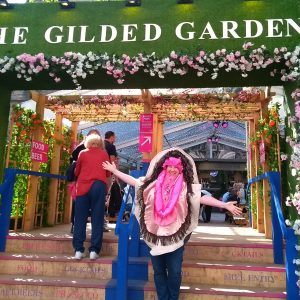 I met Elaine for a spot of flyering. She was wearing the most splendid vulva outfit, all pink and fuzzy, complete with a clitoral hood, asking passers by if they want to see a show all about vaginas. I could tell she meant business, and isn’t afraid to talk about the big stuff. After flyering, we have a catch up in the local Fringe centre. I ask her what I can expect from my pelvic floors through my pregnancy and after the labour.

“Lots of people think its labour that’s the problem with pelvic floors, but it’s actually pregnancy itself because your pelvic floor is supporting the weight of everything.”

It was a big surprise for me to hear that. I think you always imagine that it’s the baby coming through the pelvic floor muscles that does the damage, but according to Elaine, that’s not always the case. Though you’re three times more likely to have pelvic floor issues with a vaginal birth, women who have had caesarian sections will also be very likely to experience the same issues such as incontinence and prolapse.

“That’s why it’s really important to teach women how to do their pelvic floors in their first pregnancy. The NICE guidelines say that should be taught in your antenatal classes… A good strong floor actually reduces the length of the second stage, the pushing stage.”

The secondary effects of incontinence

Something I was really shocked to hear was about the secondary effects of incontinence. According to Elaine, studies have shown that if a woman experiences urinary incontinence in the first six weeks after giving birth, then she’s twice as likely to experience postnatal depression. It’s a huge number, and the consequences as we know can be devastating.

“Also if they do leak in the first six weeks after having a baby but don’t do anything about it, they’re likely to still be leaking when the baby’s twelve. So it doesn’t go away on it’s own.”

The advice? Go see a pelvic floor physio! Elaine thinks women believe it’s normal to leak after having a baby, but as she says, it absolutely isn’t.

“It takes an average of 7 years for a woman to come for help. Part of that is that women think it’s normal to leak after pregnancy. While it is common, it’s not physiologically normal, so you don’t need to put up with it.”

Seeing Elaine in action as Gusset Grippers is a hoot. I laughed so much all the way through, so much so that I needed a sit down after to give my belly a rest! But I learned a lot too- I can really see why it counts towards CPD credits for health professionals.

Elaine talks a lot about sexual function in her show. She states early on that 50% of women aren’t able to tell the difference between a vulva and a vagina, which is a troubling statistic. If we’re to be really aware of our bodies so we can figure out when something’s wrong, we need to at least be able to name the parts correctly, right?

This is especially true when it comes to sex. The vagina is pretty amazing. It widens and elongates, and produces lubrication when you’re aroused to make room for… well, whatever, but in itself it doesn’t have much sensation. That’s why during sex, foreplay centred around the vulva is so important, because it’s that foreplay that stimulates and prepares the vagina for penetrative sex. So if we don’t know which bits are what, then sex is going to be tricky. And deeply unsatisfying too. 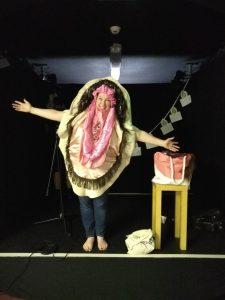 But as we know, vaginas, no matter how great they are can let us down. Menopause, pregnancy and breastfeeding can make our vagina unable to produce lubrication, so sex becomes painful. I was really interested to hear this from Elaine. I hope to breastfeed, but I also hope to be able to have an intimate relationship with my husband too! So Elaine always recommends lubricant if you have vaginal dryness, particularly after childbirth or during menopause. And as she says, “not all lubricants are made equal” so I’ll be sure to use a pH friendly water based lubricant like Sylk to make sure I’m comfortable after having my baby later in the year.

Sexual dysfunction like vaginal dryness is closely linked with pelvic floor issues and incontinence, which feeds in more widely to the secondary effects I’d previously spoken about with Elaine. It’s closely linked to our relationships, self esteem and wellbeing. Hearing Elaine talk about these issues in her show really brought home the importance of taking good care of our pelvic health.

I won’t talk too much more about Elaine’s show, I don’t want to give it away. But take it from me, I’ll definitely be doing my pelvic floor exercises religiously from now on. I’m definitely going to start using a lubricant more regularly too.

It was great to meet Elaine to understand a bit more about what she does. I certainly feel much better informed about my pelvic health. I think I now know what to do if it looks like there’s a problem after I have my baby. Go see a pelvic floor physio!

Here are some of our favourite bits from Elaine’s show. Gusset Grippers is on every day at the Gilded Balloon Rose Theatre at 4:45pm until the 26th August. Tickets and information here

Looking after your pelvic health during pregnancy 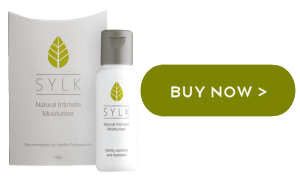